Janet Miller was always interested in art and folk art from childhood. Her father says he remembers her mass-producing artwork as a young child, so the manufacturer label also fits her well! She began quilting when she was 12 – so, she’s been doing that for over 40 years. Being left-handed, gives her a different perspective in design, so people say. Lefties are supposed to be creative!

She has a B.S. degree in design from the University of Cincinnati. After college she designed Junior Sportswear in St. Louis, and did some free lance designing in California. After marriage and children, she started The City Stitcher with Cross Stitch Designs (leaflets and chart packs).

Get more information about Janet Miller at: https://www.citystitcher.com/ 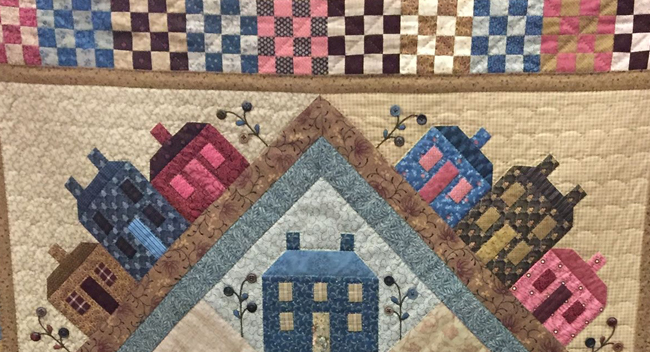 Janet Miller presented a trunk show at the October guild meeting. She shared 100 quilts that she had designed and made. She also told the story of her quilting career, explaining that her interest in quilts began as a child when she took naps on her Grandmother’s bed which was covered with a Grandmother’s Flower Garden quilt made by a great-aunt.

She has designed many cross stitch and quilt patterns under the name The City Stitcher. She has also designed and created the quilts for the book covers of four of Jennifer Chiaverini’s books in the Elm Creek Quilt book series.