The History of Our Guild

The beginnings of our Guild can be traced to a conversation between Kathy Myers and past-member Connie Bell, while at Quilt Beginnings in early 2000 (in the Main Street building, which pre-dated the Broad Street location).  They were bemoaning the fact there was no quilt guild on the east side of Columbus when Cathy Daum, owner of Quilt Beginnings, said “Why don’t you start an eastside guild.” 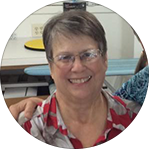 Known as the “Near East Side Quilt Guild” for a few months, the group quickly needed a bigger spot to meet.  They met at Bexley’s Jeffrey Mansion for a while, and then in a small church in north Bexley.  The guild quickly outgrew it.  A few more venues were tried until finally settling on the Bexley United Methodist Church where meetings are currently held.

No one kept track of the names of all 40 of the first attendees and a full list of founding members is not possible to reconstruct. The following partial list, however, has been drawn from meeting minutes during the first few years. Many of the names are recognizable as current, active members: Kathy Myers, Kaaren Courtney, Judy Starr-Litner Marty Rigo, Kathy Zaebst (dec.), Pam Mabe, Penny Dixon, Beth Dague, Vikki Almos, Patty Merry, Dee Dadik, Molly Butler, Connie Bell.  (If you consider yourself a founding member, and your name does not appear here, please let us know.)

In the early years of the guild, members shared their expertise with each other, presenting programs on an aspect of quilting in which they excelled. This important sharing of expertise is captured today in programs such as “Tips & Tools” and the “Quilt Divas” during which members learn from each other.  In addition, as membership increased and funds allowed, we host many national speakers to teach, enlighten and entertain the members.  Some notable visitors have included: Carol Doak, on paper-piecing; Mary Koval, on antique quilts; Laura Wasilowski, on fusible applique; Vikki Pignatelli, on using curves in quilting; Mary Huey, on adapting patterns; Bonnie Hunter, twice, on scrap quilting; and many other authors of quilt books and winners of major quilting awards.

If you have additional history of the guild that you would like to share with sister members, please let us know!

These are our members who have served or will serve as the Guild’s president: